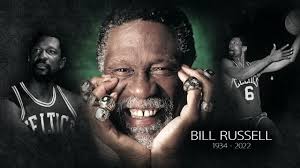 Russell’s No.6 to be Retired Leaguewide – The number “6” will forever belong to Bill Russell in the NBA. The league and the NBPA agreed to permanently retire Russell’s No. 6 across the NBA. It’s the first time a player’s number has been retired across the league. Commissioner Adam Silver said the move will ensure Russell’s “transcendent career will always be recognized.” The news comes less than a month after Russell died at 88. Russell, it can be argued, was the greatest basketball player of all time. A star with the Boston Celtics, Russell won an unmatched 11 championships in 13 seasons. He won five MVP awards, made 11 All-NBA teams and was a 12-time All-Star over his 13 years in the league. He was inducted into the Naismith Memorial Basketball Hall of Fame in 1975. Read more at:  https://sports.yahoo.com/nba-nbpa-announce-league-will-permanently-retire-no-6-in-honor-of-bill-russell-191707733.html (Chris Cwik/Yahoo Sports)