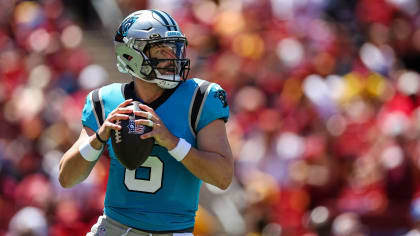 Panthers Select QB Mayfield as Starter for Week 1 – The Panthers have a new starting quarterback. And a new direction. Panthers head coach Matt Rhule announced Monday that the plan was for Baker Mayfield to start at quarterback in the regular season opener. “When we started this process, we were looking at three things,” Rhule said. “Number one, mastery of the offense, number two, situational football excellence, and number three, moving the ball and getting guys involved. That’s been our focus all along. “Baker has made a lot of improvement, a lot of growth in all three areas in a short amount of time.” The Panthers have Sam Darnold and PJ Walker on the roster, after rookie Matt Corral suffered a foot injury Friday which will likely keep him out for most if not all of this season. Read more at:  https://www.panthers.com/news/baker-mayfield-announced-panthers-starting-quarterback (Darin Gantt/Carolina Panthers)